Here is a shot of me wearing Heidi tights by Fiore with matching high heel shoes. This is such a cool woven pattern and the tights are very stretchy because they are made of microfiber. The top part is not pitch black because this has a cozy melange effect to it as two types of yarn are being used.

I like it that they are completely sheer to waist and there is no t-top or knickers part. I could easily wear it with a high cut outfit.

Isn’t summer the best time to stock up on winter tights? These are now on clearance for $4.99 like a lot of other limited edition tights on this site. There are just a few units of Heidi left in stock.

Photos of me wearing Ravenna brown tights by Fiore

Here are some photos of me wearing brown Ravenna tights by Fiore. Currently there is only size small left in black and brown. The weather was horrible and rainy, I stayed indoors and decided to take a few pictures. My new shoes turned out to be a perfect match.

I saw photos of this woman in a circus bodysuit on someone else’s Facebook page and I just had to share it.  As many of you may know by now, I am a big fan of the circus and their costumes, bodysuits, and other outfits for the stage.

To me circus is part of country’s culture, like art galleries and music orchestras.  If it would be up to me, I’d have this kind of art funded by the government of each country.

How does this woman manage to be that flexible and smile while doing those positions? I guess it’s one thing to reach such flexibility, but a whole different matter to perform with a big smile as if there is nothing to it.

I like her sheer and sensual bodysuit and maroon leg covers.  It creates the illusion as if she is wearing basically nothing.  For Cique Du Soleil, for example, some outfits need to be changed every few weeks because of the vigorous activities these performers do.

I wonder how she can bend her spine like that!

Oh wow, imagine the possibilities in this position!

Vera Wylde and Her Tips for Crossdressers 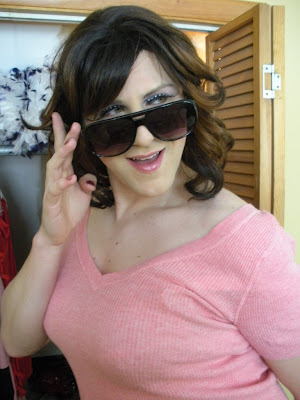 Vera Wylde is one of my most favourite crossdressers to watch on Youtube.  Even though I am a genetic woman myself, I always had that question of “How do they do it?” when looking at a beautiful drag queen on stage.

One time in Toronto I saw a feminine apparition like that at the Pride Parade and I was amazed by her grace to the point that I asked her if I could kiss her hand.  She let me!  Really don’t know if she expected a gesture of this sort from a woman, especially a straight woman, who knows.

Vera in her Youtube show reveals many secrets of how dressers can pull it off so well.  Here are some that I find especially entertaining.

The general rule of thumb is that if it has breasts, it’s a woman!  It’s like a badge of femininity.  Actually not only dressers have the challenge of creating breasts.  There are women who are flat chested, but don’t look like that because of all the padding and silicone breast forms that they insert in their bra.

Vera mentions breast forms as a more feasible option to fill the bra, create a cleavage without looking like a caricature.  But she warns you that it may be expensive!  You can see some examples at this breast form store that sells them so realistic that they even have a nipple.  Vera recommends to acquire a pair because otherwise the clothes just doesn’t fit properly – she already owns two sets herself.

You can watch the video below where she talks about some tips and points out technical details that she discovered for herself, like why an insert that was supposed to be cup D ended up fitting like cup C.  For most of us it’s probably a surprise that such inserts even exist.

Vera also touched on the topic of hosiery: knee highs, stockings, stay ups, pantyhose.  For most of you this is pretty basic information, however I must admit I’ve never seen anyone roll on stockings before.  I bunch mine up in my hands and slowly release it as I pull it on.

Her preference is stockings over pantyhose because she doesn’t like the constricting feeling on the top.  She would rather wear a garter belt to hold up her stocking.  In one of her stage performances she even dances around in a corset and stockings held up by a 6 strap garter belt.

Walking on high heels is a challenge that not only cross dressers experience.  When I lived in Toronto, I remember laughing every time I’d go to a club.  Young women there would get a tipsy and begin to wobble off the dance floor, grabbing on walls and bystanders, trying not to fall off those stiletto heels or lose a shoe all together.

Vera mentions that it is better to buy a shoe that has a thicker heel and a strap on the top.  That type of shoe looks like a tango shoe and that strap makes it so much more comfortable to wear.  This is a perfect shoe for women like described above who don’t want to end up walking around barefoot by the end of the party.  A sky high heel shoe just will look comical on a person who can’t walk on it.

Vera Wylde recently started a form of Q & A called “Dear Vera”.  So if you have a question for her, feel free to ask her.  She is a very unique individual with a lot of insight on the subject and she also runs a blog.  Maybe some day I’ll get lucky and have a chance to watch her perform on stage or even meet in person.

I went to a comedy in Vancouver and I was jumping up and down in my seat when they played this video in the intermission.  I couldn’t believe it!

This actor does a formal talk about business events.  But as soon as he is finished, he walks off, revealing his bottom half in pantyhose and high heels.  His confidence is outstanding!

If you live in Vancouver, consider visiting Vancouver Theatre Sports League for great entertainment.  They are located on Granville Island.  Go see them, it’s actually proven that laughter is good for you on both spiritual, mental, and physical levels.

Race on High Heels in Russia – Pantyhose Not Ripped in Vain

Maria Gridina, on the photo above, dressed in the spirit of the high heel competition, so she wore beige pantyhose and funny striped socks.  She really tried hard, but she fell and ripped her pantyhose, scraping her knees.  No worries, doctors right away took care of her injury at the finish line.

She still however found the courage and strength to pose for photos and smile and her efforts were not in vain.  She got a prize for her “Determination to Win” for her strong will.  The prize was a gift certificate for a beauty salon.

Not all contestants were young, there was even a woman who wan the prize “Most Gracious” at the age of 55.  It’s never too late to be fun, sporty, and feminine!  The race on high heels brought out all ages.

In Barnaul city though there were some restriction – only blondies (or brunettes in blond wigs) could compete and they had to wear pink clothing.  The distance was 100 meters.

Karina Barbie is came to run on high heels.

The heel length requirement all over Russia seemed to be consistently at 9 cm.  The winner was a 27 year old accountant who admitted to practice for the whole year to run on heels.  She went to run at the stadium on high heels for practice and also researched information on how to walk properly on such tall shoes online.

This run was organized by Glamour Magazine.  For this run more then a hundred women were required to go 50 cm on high heels.  Many of them even taped their shoes to their legs to prevent losing them.

Karina Barbie was one of the contestants.  She is a fun character, full of confidence and desire to be known as the “living doll”.  She wears almost everything pink.

Along with Karina Barbie, there were other local celebrities present at that event, like Russia’s Eurovision contestant from 2011, mostly probably for promotional purposes.

The winner of the race was a professional runner.  She was wearing black leggings, maybe about 60 den, but overall her outfit for some reason was more sporty then sexy even though she had beautiful heels on.

So, when is such competition coming to North America?  I am sure that I’ll take the prize for Best Pantyhose, but for sure not speed.  One of my teachers used to say that it’s not the winning that matters, but participation.

*Friends, the only funding for this blog is from the shop section.  Please indulge your pantyhose obsession and show some support for my work!  Your purchases make this blog possible.*

Pantyhose on a Motorbike in Vietnam

Just wanted to share with all of you something I’ve heard today about wearing pantyhose on a motorbike.  My friend told me that in Vietnam women wear pantyhose even in hot weather and go to work riding the bike in their fancy shoes, skirts, and so on.  Of course, that means that the quality of pantyhose must be much higher in order to resist such activities.

Someone suggested that maybe they wear opaque hosiery that is more durable while riding… no, it can be very hot in Vietnam, but women still wear sheer hosiery to work for professionalism.

I have a good Vietnamese friend who tells me all these things.  She is very educated and she loves to wear tights / pantyhose.  Turns out that Vietnam is very progressive in terms of their equality when it comes to education.  Both men and women study and build careers.

Such women in pantyhose and office wear on a motorbike is common sight in Vietnam. Do you want to see more entertaining posts like this? The only funding for this blog is from some sponsors and from the hosiery shop.  Please have a look, you’ll be more than satisfied!  Please take some time to shop and sign up for our newsletter too.